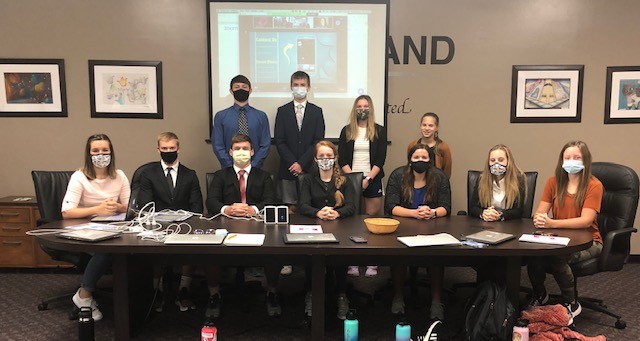 The Nebraska FBLA Fall Leadership Conference was held on September 30.  This year’s conference was a virtual experience with live and on-demand sessions for local officers, members, and advisers.  The live sessions began with opening remarks from our state president followed by a keynote from Aaron Davis who is a professional speaker, coach, trainer, attitude expert, and former Nebraska Cornhusker football player.  His keynote was titled, “Amplify Your Leadership.”

Following the keynote, the officers and members participated in live workshops presented by the FBLA state officers.  The workshop topics were President and Vice President, Secretary and Treasurer, Reporter and Parliamentarian, Maximize Your FBLA Engagement, Communication is Key, and Build Your Team.  While each officer joined the workshop that pertained to their office, the other officers and members had the opportunity to watch 26 on-demand videos on various topics such as FBLA Week Planning, State and National Projects, Resume Writing, Scholarship Applications, Membership Recruitment, Boost Your FBLA Knowledge,  and Prepare for Competition.