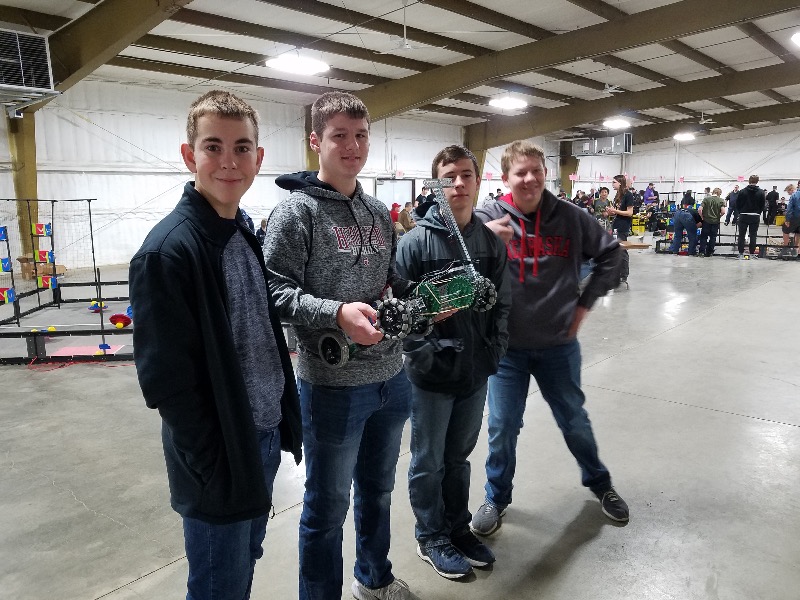 After receiving a $10,000 grant in early August, orders were placed for the equipment.  The order was not fulfilled until January 23rd.  The team’s first competition was to be on January 26th,  the team of 11 students traveled to Ravenna to observe what a VEX competition entailed.  They spent the morning watching and asking questions of participating teams, then returned in the afternoon to build their competitive robots.  They spent over 20 hours building robots and entered their first competition in CREATE Open meet (a competition in which anything goes in building the robot including:  wood, plastic, tubes, nets, etc.)  held at Aurora on February 2nd.    The teams consisted of:   Interstellars:  Odessa Ohrt, Lauren Quiring, and Harmon Perez;  Brogrammers 2.0:  Alex Goertzen, Dawson Ohrt, Tyler Lewis,  and Aaron Goertzen; and HD Rumble:  Cooper Regier, Tobin Glinnsmann,  Heath Perez, and Jamie Rowe.  They competed against teams that had built their robots in months, many over 200 hours were spent on this year’s robot.  Two teams, Brogrammers 2.0 and HD Rumble, advanced to the final tournament bracket, consisting of 12 Alliance teams, or a total of 24 teams.   Both won first round and lost in the second round, which was an excellent showing for the Heartland teams at their first competition.

VEX robotics is a worldwide event that includes three levels, VEX IQ for elementary and middle school students, VEX EDR for Middle and High School, and VEX U for college students.  The VEX EDR competition includes two portions:  a driver-mode and an autonomous.     In the autonomous mode, students write computer codes using C++ language and a newer language called VEX Studio, in which the robot complete tasks without any aid of the student.     In the qualifying rounds, a robot runs autonomously for 15 seconds and a driver hand controller mode for 1:45 minutes.  This year’s competition game was called the Turning Point.  The scoring involved flipping 10-inch disks, placing disks on poles, shooting balls at flags to turn to Alliance colors, and parking on platforms.  Scoring ranges from one point to six points per task.  Each match consists of 4 teams, with two on blue Alliance and two on Red Alliance.  Each team is randomly assigned alliance partners for each match and both teams share the points as well as the final outcome of a win, a loss, or a tie.  The teams usually compete in 6-8 matches in the preliminary rounds.

At the Melee of Mount Michael St. Benedictine school in Elkhorn on February 9th, teams were once again facing adversity with robots not able to use their autonomous programs as the coding they used would not work with the VEX system of starting and ending the timed matches.   An Elkhorn teacher helped the teams to write new code so they could compete in the tournament.  The teams lost some critical points as there was not enough time to change all of the programming before competition started.  On this day, two teams made the final tournament consisting of 8 Alliance teams.   The Interstellar team lost in the first round but not without a fight for the top of the Alliance platform.  Lauren Quiring was the controller of the robot, which was much smaller than the opponents but was able to gain the top with a final surge for 6 points.  The HD Rumble team won their first two matches but missed finals.

The teams ended with these results from a total of 28 teams: HD Rumble:  5-2-0, 5thplace; Interstellar:  3-3-1, 10thplace; and Brogrammers 2.0:  2-5-0,  20th place.  The coaches are very proud of the accomplishments of the teams in such a short season.   The members are done with competitions, but they will continue to meet to improve their programming coding and building a robot to complete tasks that they were not able to do in the limiting time period for this year.  The new game and missions for 2019-20 school year will be released in late April.  The future looks very bright for the VEX robotics program at Heartland.