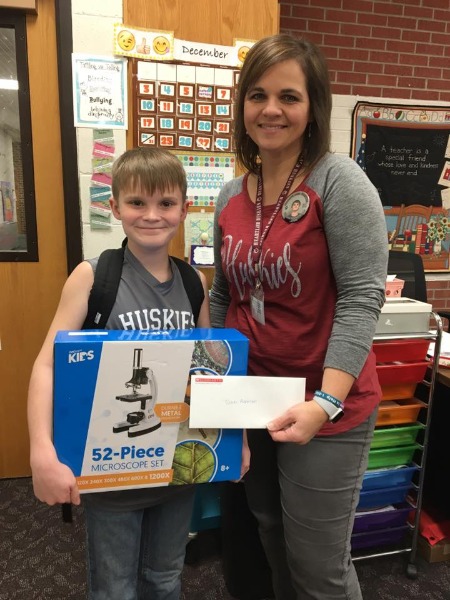 In fall 2017, Pfizer, in partnership with Scholastic, launched a program that encouraged children across the country in grades K-5 to dream up solutions to medical and societal problems to help make the world a better place. The If Kids Could Cure contest asked kids to explain a problem, design a solution, and draw a picture to illustrate their solution.

The contest was inspired by the Pfizer Dreaming of Cures ad, which tells the story of Rosemary Orciari, Quality Operations Site Lead at Pfizer. As a young girl, Rosemary was diagnosed with cancer and dreamed of a cure when she was in and out of the hospital. Once she became well, she dreamed of becoming a scientist to help find cures for others like herself. At Pfizer, she has worked on a variety of projects and seen the impact her work has had on the lives of others.

Tucker Robinson, a fifth-grader at Heartland Community Schools, was named the grades 3-5 winner in the contest for his solution to help kids with diabetes learn how to take care of themselves. His winning idea was to create stuffed animals that can detect blood sugar levels in kids and gives prompts to help them take care of themselves. Tucker’s idea was inspired by his uncle who has diabetes.

Tucker will be honored in an assembly at his school, Wednesday, January 17, where Lt. Gov. Mike Foley will give remarks. Tucker’s school will receive a $15,000 grant for their science program and books for his classroom. Tucker will also receive a backpack filled with science supplies.